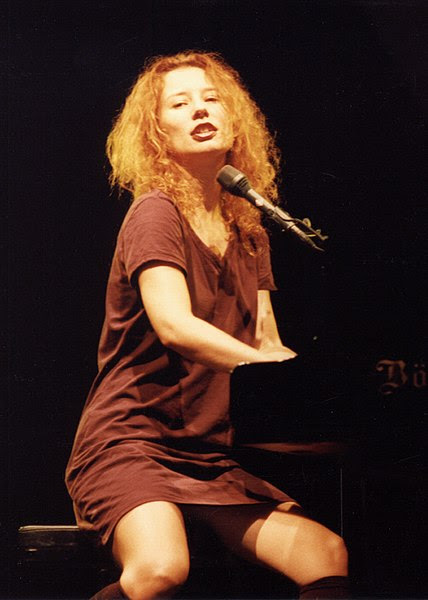 I don't think I pay enough homage to my favorite famous person, Tori Amos. For a person I've never met, she's one of the most important people in my life. Is that pathetic? Or is it just a fact of life in the 21st century?

I mean, in the 19th century a lot of people loved Abraham Lincoln and they didn't know him. Granted he was the president and ushered along the end of slavery.

Though she didn't end slavery, Tori did found RAINN - the Rape Incest & Abuse National Network. After the release of "Me and Gun" she had so many people reaching out to her to tell their stories and to seek help, so she had to do something.

From the Everything Tori homepage:

Tori Amos is a founding member of and has been one of the main spokeswoman for The Rape, Abuse & Incest National Network (RAINN), the nation’s largest anti-sexual assault organization. RAINN created and operates the National Sexual Assault Hotline at 1.800.656.HOPE. RAINN also publicizes the hotline’s free, confidential services, educates the public about sexual assault, and leads national efforts to improve services to victims and ensure that rapists are brought to justice.
1 800 656 HOPE (1 800 656 4673)
Free & Confidential 24/7

Tori is also important to arty/geeky girls and gay boys around the world for giving them cathartic songs to listen to when wronged by boys, men, girls, women and society-at-large, especially during adolescence. I say this rather flippantly but it is, in fact, what made me feel better. My freshman year of high school, after Gre g Ther an dumped me for Meghan R ull - I wrapped myself up in the balm that was Little Earthquakes and emerged be-decked in bell bottoms, seventies butterfly collar men's orange and blue zig zag striped sweater and funky platform boots ready to tell the world who I was, what I was like, and how I thought, and to do so unabashedly. And I don't think I could have done that had I continued listening to Mariah Carey, like I did during the junior high years. (This was before she got boring and wore hootchie clothes, mind you.)

So, for no particular reason, I just wanted to say - Tori Amos is the best and I am grateful that she's around.


The following post was originally posted on one of Bridget Eileen’s old blogs: In the Pines, Neophyte Poetics, Bridget Eileen’s Commonplace Book, Dreaming Bridge Designs or A Vegetarian Notebook. They aren’t all fancy with photos and subheadings and search descriptions, or even that much content, sometimes. They’re here for posterity, because it’s fun to read the archives!