My Boy Jack: Harry Potter, Samantha and the guy from all those Hugh Grant romcoms

on April 20, 2008
Last week Kim Catrall, "Samantha" on "Sex and the City", was on NPR's "Wait, Wait! Don't tell me!" She was on to promote the upcoming SATC movie and also the PBS Masterpiece movie that premiered tonight, called "My Boy Jack."
Belligerent jerky Rudyard Kipling (played by David Haig) is all hawkish about Britain entering World War I. His son Jack joins the Army for a number of reasons, including to fulfill his dad's wishes, to become his own man, and to escape his over-bearing, zealously patriotic father.

The movie was okay. The actors were very good, and Harry Potter continues to show he can be more than just Harry Potter. (Remember Equus, with the horse and the nakedness?) Although it was totally weird to see Harry Potter with a flimsy mustache. It was also funny to see Samantha covered head to toe in Edwardian costume and being all mum-ish. She still was sexy though. She just oozes it, even in ankle length dress. 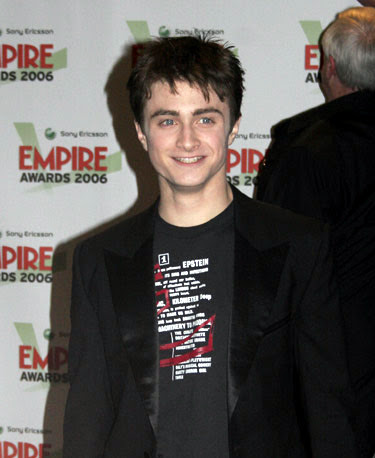 I thought the script was a little weak. I would have liked some more story development. It seemed rushed. BUt, if you like Masterpiece movies, then you'll like this one, too.

The PBS site is here.

The poem (which gives away the ending of the movie) that Kipling wrote for his son:

“Have you news of my boy Jack?”

“Oh, dear, what comfort can I find?”
None this tide,
Nor any tide,
Except he did not shame his kind—
Not even with that wind blowing, and that tide.

Then hold your head up all the more,
This tide,
And every tide;
Because he was the son you bore,
And gave to that wind blowing and that tide!