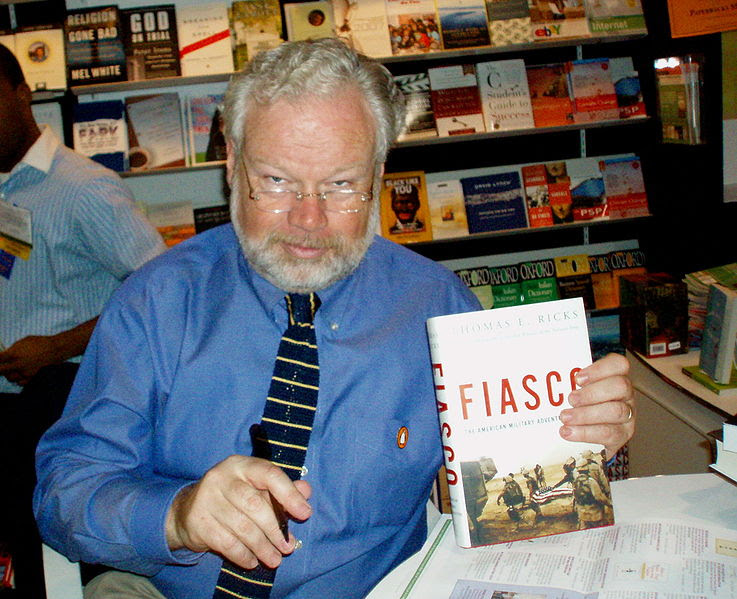 As promised, I am reviewing my recent book acquisitions. This one is of the random books I purchased that had nothing to do with school: Fiasco by Thomas Ricks.

I read this book in fall 2006 when it first came out in hard cover. I think it is one of the most important books of the Iraq War books out there. (And my are they numerous.) But what Thomas Ricks wrote about in here had so many reverberations. Indeed, I don't think the "surge" strategy would have been even considered and the "stay the course" mantra would have kept going had it not been for this.

It's a detailed account of how miserably managed the run up and first phases of the war were. It's a maddening account, actually because there's so many things that happened that people working in various departments had foreseen but were literally fired for foreseeing. Talk about emperor having no clothes.

Here's this quote, from page 79, "It wasn't that there was no planning. To the contrary, there was a lot, with at least three groups inside the military and one at the State Department working on postwar issues and producing thousands of pages of documents." Things like keeping the Iraqi army intact to handle post war operations, so that there were people to run the inrastructure and not a a lot of jobless, angry ex-military personnel. But guess what? Other, more senior officials of the war, overrode such plans and went with their own. Blame Douglas Feith, L. Paul Bremer and Gen Franks for such brilliance, to name a few.

Another thing that Ricks does in Fiasco is sing the praises of the intelligence and capability of General Petreus. This was before he was promoted to top US commander in Iraq. Ricks also talked about strategy and counter-insurgency practices, often referring to what is laid out in the manual "Counterinsurgency Warfare" by Galula. The things Ricks stressed from this manual that should have been implemented during the beginning of the war, are now in practice.

So, if you care about history and current event and history in the making, I suggest Fiasco. It's also written like a really great movie script--not trashy or shallow, but well developed in characters and great texture, great language used for the purpose being applied. It's 439 pages (without addendums to the soft cover and without the notes) and it reads very quickly. I did it in a week.
artsy stuff commonplace book fiasco in the pines political books Politics thomas ricks