Other Flowers the uncollected poems of James Schuyler, a reading at the Poetry Project 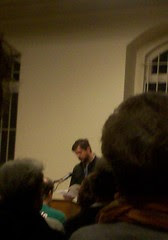 Though I was unable to get a photo of every reader (the people in front of me kept moving their heads too much...) here's the best I could do from my farther-back seat this past Wednesday, April 21, 2010 at the Poetry Project at St Mark's Church in New York City. (Something's better than nothing, right?)


http://www.flickr.com/photos/7853928@N08/sets/72157623797605567/
The event was a special one and I can say with earnestness that each reader read with a personal passion and attention of the selections of Schuyler's poems -- mostly from the new text, some from other books. Schuyler, I feel, is a poet who, whether one actually knew him or not, has an independent fragility, a tender honesty, that makes his followers devout (much like dearest John Wieners).
Here's a selection from the new book:
POEM (A NOTHING DAY)
A nothing day full of
wild beauty and the
timer pings. Roll up
the silvers of the bay
take down the clouds
sort the spruce and
send to laundry marked
more starch. Goodbye
golden- and silver-
rod, asters, bayberry
crisp in elegance and
small fish stream
by a river in water.
p. 84, 'Other Flowers'
All Poetry Posts artsy stuff commonplace book james meetze James Schuyler other flowers poetry project poets writing