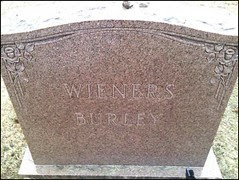 I was in the area so I stopped by John Wiener's cemetery, Milton Cemetary off of Centre St in Milton, again today. It was very nice out -- perfect spring weather and it smelled like budding, earth, dirt and green. I ended up reading more from Mrs Basil E Frankweiler, of all things. Then I took a nap by accident, which as a somatic exercise a la CA Conrad (like: "sleep on top of the bones of your favorite poet...") might have something to it. Because afterwards, I also did some writing. Not so much writing poetry, more I was thinking about the writing of poetry. Particularly poems with longer lines. I've been drawn to them lately and have, when the sporadic writing muse comes to visit, more often than not been writing longer lined poems. My graduate thesis is full of short, concise poems, for the most part. There is, however, at the end, poems that are longer. My thinking and feelings were clearer and more focused than they'd been in a while. It could have been the sun, the spring, the open air nap. But it could also have been the setting of the nap, too, for such vivid writing and thinking.
Anyway, if you'd like to see what all the John Wieners fuss is about (why I'd make trips to the cemetery), you can read a significant chunk of "Cultural Affairs in Boston" from Google Books:
All Poetry Posts artsy stuff Books commonplace book cultural affairs in boston John Wieners poets writing