Kitka, Encounters at the End of the Word, and the Most Beautiful Music I've Ever Watched

Five of my favorite minutes from any movie I've seen--scenes that stay with me well after the fact--are from minute 6:30 to 11:20 on this clip of the Werner Herzog documentary "Encounters at the End of the World." Under the icy ocean in Anarctica is a strange world of colors and creatures you'd think were other-worldly if you didn't know better.

There is no soundtrack to this film, but through the magic of the internet, I found that the song played during this part is Bulgarian, called "Tsmindao Gmerto Orovela". I couldn't find the version that was played in the movie, by the Female Chorus Group by National Music School of Telavi. However, I did find a version by a female vocal group called Kitka who performs Eastern European songs. 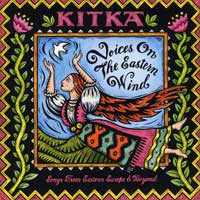