Take It from a Cis Het Woman: Keeping an Open Mind Is a Wonderful Thing!


Happy #BiVisibilityDay to all my bi- and pan- friends, especially the ones I have dated! That is to say, as an open-minded cishet woman unopposed to relationships with men who identify as bi- or pansexual, it's been a joy to have such partners in the past. I want to acknowledge & send my love & support to them, and to all! ❤️


Back when I was on the Internet Dating Machine (I'm currently in retirement) a lot of the bisexual men I encountered on dating sites were really grateful to me for not excluding them as possible partners because of their sexuality. Can you believe that? And this is in the past few years, mind you, not, like a zillion years ago.

It's sad that even contemporarily bi- and pansexual people face rejection because of their sexuality, but that's why Bi Visibility Day is important to have and to celebrate. And while those past relationships with bi- and pansexual men didn't work out as long term relationships, I still built good friendships and experienced interesting and fulfilling-in-their-own-way romantic relationships from them.

The other thing to note is that bisexuality doesn't mean the person will or will not want to be monogamous or non-monogamous, just as one's heterosexuality or homosexuality doesn't determine their desire for that. For my part, since I am what I call "poly-flexible" as in, I can be open to open relationships, or I can also accept monogamy if that's what my partner wants, this wasn't a worry for me. However, I think some people who want to be monogamous exclude a bi- or pansexual partner because they assume that partner will not want monogamy. That's not necessarily true! It all depends on the situation and the people in the relationship. So!...


I just want to make sure that everyone keeps an open mind to finding love, romance, or pleasurable relationships with people, no matter their own, or the other person's sexual identity and disposition to open or monogamous relationships. When you open yourself up to possibilities, you can have experiences that are surprising and fulfilling, in many facets. 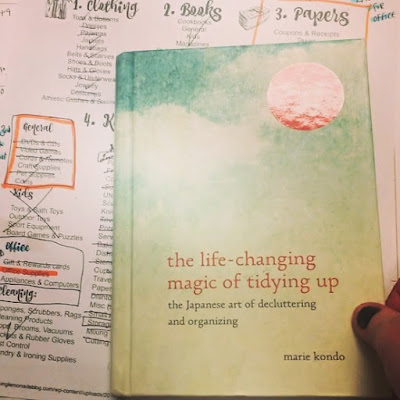 "Sparking Joy" at Work: How I Used the KonMari Method to Organize My Office

The Occasional Organization Post: Using Marie Kondo's Method of Tidying and Organizing at Work As many of us have learned from reading "The Life Changing Magic of Tidying Up" or from watching Marie Kondo's "Tidying Up with Marie Kondo" on Netflix, the magic of her method is in its underlying philosophy and guiding principles: it's about "keeping what you love" and surrounding yourself with items that "spark joy."
So how on earth could one possibly use the KonMari Method to tidy up their office?! What "sparks joy" in paperwork? How can you "love" your Inbox?
That's a question I set out to answer for myself this summer, when I decided to embark on a project of KonMari-ing my workspace.
My Previous KonMari Tidying Up Experience
A year and a half ago I moved from Massachusetts to Rhode Island. Though they are little states, and Boston and Providence are not far from each other, packing for me was a BIG project. I…